Central Florida’s Version of Winter is Upon Us

What’s going on in the Woods of the Wekiva? January, 2016 edition

Central Florida’s version of winter is upon us. Like the other seasons, there are plenty of signs that winter is here, but this winter is not necessarily evident in colder temperatures and low humidity with no precipitation. In fact, we have mostly experienced just the opposite during this winter.

Winter provides a great opportunity to hike in the state parks of the Wekiva region. Many of my comments about the telltale signs of winter are based on two 10-mile hikes that I have recently completed: one in Wekiwa Springs State Park, and one in Seminole State Forest. I have tried to capture some of the experiences and images in a brief article on the Friends of the Wekiva River homepage – take a look. 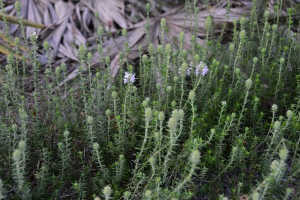 These hikes provided a glimpse of the diversity of natural systems that have been protected in the conservation lands buffering the Wekiva River. The hikes that I referred to traversed from flatwoods to sandhills to scrub to floodplain to aquatic habitat associated with river, and travelled along the river, creeks and springs. They are in marvelous, natural condition, and they are managed well by Park and Forest biologists. In those treks across the landscape, I made note of a few indicators of winter, even if it was over 80° during portions of the hikes. Here’s what I saw: 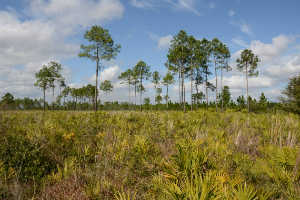 Although not yet blooming, I noticed the vegetative growth of dozens of irises that have emerged in the wetland floodplain in the Forest. I made a mental note to come back to this area next month when these plants will be in full bloom.

There is substantial, dramatic land management ongoing at Seminole State Forest. Buffered from large-scale natural perturbations, particularly fire, natural systems in central Florida almost always require human intervention to sustain some semblance of their natural function. In the Forest, a large block of scrub habitat has been roller-chopped and burned in order to mimic the historically natural patterns of periodic fires. 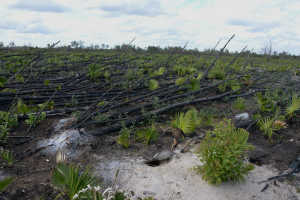 The current condition of the areas that have been disturbed is fairly stark, and I have heard several people comment about the apparent destructive actions that were implemented. In order to sustain Florida scrub-jay populations and a balance of different ages of scrub habitat in this relatively small enclave of scrub, these management actions are occasionally necessary. Now that it has been a number of weeks since the chopping and burning, new growth pervades within this scrub habitat, and gopher tortoise burrows show signs of recent activity. The scrub-jays that inhabited this area may have had to adjust their home ranges in the short-term, but the enhanced suitability of the habitat when they return should be beneficial to them.